Haniya looked at the pin prick of blood on her index finger, lingering on its vital redness just a moment longer than usual. It was Tuesday today. She blinked, her mouth curving into a faint smile, and then wiped her finger with a rag strewn with little speckles of rust-red.

Haniya sewed initially becasue she had the skill and she liked the meditative quality of the needle going in and out of the fabric. With time and the fickle nature of circumstances, that labour of love had morphed into an exertion underscored by urgency and need. There was a little money that came in from a couple of modest investments that her husband had made and a small monthly stipend that her brother sent her. These meagre streams of income Haniya augmented with the little windfalls that she received for her delicate needlework.

After her husband had died six years ago, she had taken on the role of the provider and the “man” of the house. That last title was foisted on her when she had scared off two thieves, adolescents really, who had come to burgle her home; of what, she still sometimes wondered as she mentally scanned the modest contents of their two bedroom townhouse rental.

She put the shirt down with its spray of jasmine that was slowly coming to life under her deft handiwork. She took a sip of her tea – her fifth cup since the morning and it was only noon now. Her mind wandered as the still hot liquid warmed up her cache of memories. Faizan had loved his tea too. She would make two steaming cups when he came in through the door at 6 o’ clock in the evening. Husband and wife would then sit in each other’s company, communicating almost solely through harmonious sips of the hot beverage. Faizan had been a man of few words, and he was especially grateful for the acknowledgment and understanding of this quiet reticence by his wife. For him, the highest form of language was one of the heart and of harmony of action. His evening cup of tea in the quiet company of Haniya was probably one of his dearest forms of togetherness. On weekends the couple would demolish almost a quarter bag of tea leaves, taking turns to cook a potful, its four-cup contents disappearing in under half an hour each time.

Haniya had been a voluble, chirpy young woman when she had got married at 21. Under the calming, quiet influence of her husband, coupled with the fact that they had their first child five years later, she had gradually spoken less and less. Over the years, she had slowly replaced her outer chatter with the quietude of inner serenity. Now, sometimes days went by and she hardly said a word out loud until both her children came back home from university. Both, Ali and Laiba had fitted into and then emulated their parents’ reserve. And so, the years had plodded on largely to the hazy sounds of life from outside of their quiet bubble of existence.

Haniya picked up her empty cup and went to the kitchen. It was almost 1 o’ clock. She needed to start preparing lunch. Laiba would be home at 3. Ali had just started working at a bank and usually came home after 7.

“Amma, I’m never getting married” said Laiba as they both sat at the little dining table over plates of two day old daal* and sabzi*, their protracted spice-infused marination made up for with fresh, hot roti from the tandoor* downstairs. Haniya looked at her second born with a little smile.

It was a game they played occasionally to call to heel any depressing thoughts that at various times, tended to meander through the purple-grey spaces in the minds of the two women. Before either drifted into inner worlds with clouded skies, shutting out the late afternoon sunshine falling on her face, the other would pull her right back.

Her mother’s morning musings were still etched in her face and Laiba, reading them, had dropped a conversational grenade to shatter any bruise-coloured doors closing out the brightness of the day. She was happy and an essential part of the fruition of that sentiment for her, was seeing her mother’s gentle smile.

“And why is that?” asked Haniya, her own smile widening at her daughter’s bright-eyed playfulness.

“Because I’m going to miss these vintage daal and sabzi lunches amma – straight up manna from heaven they are!”

Haniya laughed at the affectionate sarcasm thrown at her by her feisty daughter while Laiba grinned back with dancing eyes.

It was Tuesday today. Vegetable delivery day. Vegetables and conversation day. Vegetables, conversation and a bit of a happy flurry of the heart day. Haniya smiled. Even the dispiriting act of putting three-day old curry back into the fridge for another meal, didn’t dampen the pleasure of her Tuesday afternoons. She looked outside the kitchen window at a world that was shimmering in the late afternoon sunlight. She felt a happy little surge in her own heart as she glanced at herself in the glass door of the kitchen cabinet. Seeing the smile spreading to the corners of her brown eyes, she instinctively lowered her gaze, collecting herself. Those crows feet were only ever supposed to crinkle in pleasure for her children … and later, for her grandchildren, she chided herself. She sighed, feeling the tentacles of exasperation and helplessness slowly coil around her solar plexus.

Why? she asked herself in the next instant, reaching for her heart, fortifying herself against the censorial voices of tradition and expectations. Why did happiness for her have to always be a borrowed emotion – borrowed from her children and even from her unborn grandchildren? Borrowed for a brief while and then returned; always given back; never made her own. Why did she have to become a hollow shell of herself because she was widowed, permanently denouncing the vital, pulsing, feeling part of her? Why couldn’t she allow herself to be happy for herself; for something that was specifically, wholly, stirringly hers?

Because you’re a middle aged widow with grown up children, berated the part of her that was used to being loud, commanding and keeping her respectable.

Haniya willed herself, as she had learnt to do over the last few months, to focus only on the feeling of warmth that had been sweeping her up in its flow. Thinking beyond the visceral emotion, invariably woke up a whole slew of confusing, disapproving thoughts that would then mock and scold her until there was no pleasure left anymore in her Tuesday afternoons. Her afternoons that were filled with all shades of greens, reds and yellows as she bought a whole week’s worth of vegetables from Raza bhai. Raza – the bhai* had been largely dispensed with six months into these Tuesday afternoon exchanges, only ever surfacing if one of the children was within earshot of their conversation. These improvisations were made intuitively, unthinkingly.

Haniya Faizan was a respectable, middle class woman and following social norms was a part of her DNA which had also faithfully served her self preservation instinct. She was not a woman who went against the flow of convention, and had fitted herself into the box of widowhood that was resoundingly set at her door when her husband had passed away. She had then dutifully folded up her sexuality and put it safely away in the box to let it molder in the blessed throes of time and aloneness.

Haniya was still youngish however – 48 – and so despite society’s asexual prescription for her for having survived her husband, there was always a motley brigade of men that roamed around the box, hoping for Haniya to make a fissure just big enough for them to strut in. For most of these hopefuls, the end of their particular widow-exploit was yet murky in their minds; so much of that depended on the woman. If she relented, they could bestow her with male companionship, diligently cloaked from the world and their wives. If she didn’t, well some would leave it at that, while a not entirely insignificant number of others would put in focused efforts to torment her in big and small ways. The patriarchy, on such occasions, is said to be a mysterious beast, sweeping up entire communities of men and women in its ravenous wake. So far however, and especially after the encounter with the fresh-faced thieves, Haniya had been spared proposals of both, the decent and indecent varieties.

But there were changes afoot; little dalliances from the norm that were making their way into Haniya’s heart and she was feeling their, as yet unformed textures, with a mixture of anxiety and anticipation.

A tad controversial? Maybe. But am I still saying it out loud, in rhyme and meter no less? But of course. Some folks mull over things in the privacy of their heads, others whisper them in low tones while my iPad … well, it just blurts them out, no holds barred. Whoosh! Here it comes like a sweetly painful winter chill to get your adrenaline up and your spine a-tingle.

Listen to the poem being read here: https://vt.tiktok.com/ZSdn6UdCw/?k=1 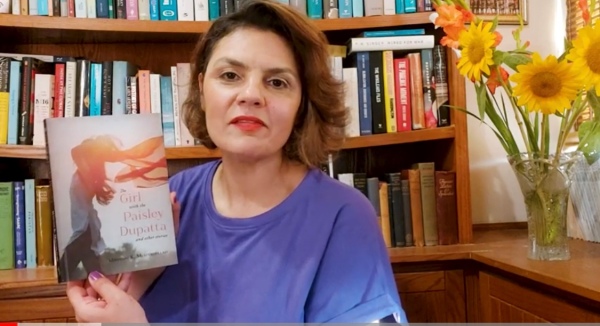 Wanted to share with you the first ever review of my book of short stories “The Girl with the Paisley Dupatta and other stories”. The review was done by Maha Qazi of the YouTube channel Maha’s Musings.

She’s done a pretty good summary of the book in general and has also mentioned very relevant specifics from within some of the stories.

(P.S. I would describe myself as a “corporate RUT absconder. A bit of a Nutty enigma in the intro there! 😅)

Listen to the poem being read here: https://vt.tiktok.com/ZSdn6QjcC/?k=1