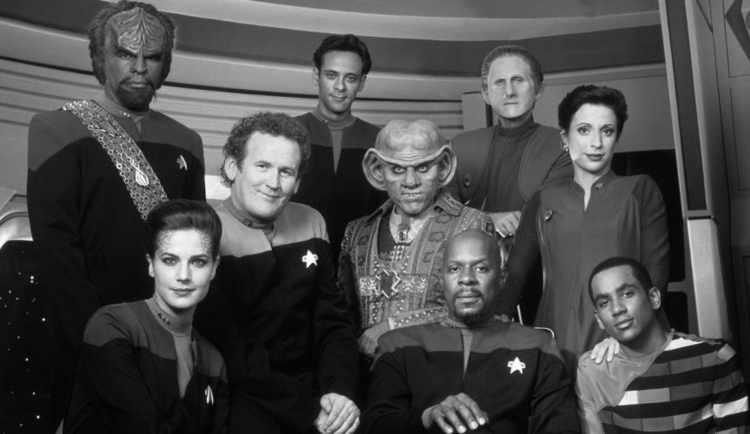 It was slow I admit, the nascency of a connection with the ST-DS9* characters and their Deep Space shenanigans. But by season 2, I had developed a mild fondness for the Captain and his Federation crew. And by season 4, the affection I felt for the space Station denizens was deep-rooted and personal. By season 5, I was already forlornly anticipating the end of the series and feeling at odds with the rest of the Netflix science fiction repertoire.

That is not to say that i was blinded to the obvious shortcomings of the production; they just became tenderly blurred as the characters became increasingly larger than life. I still remember cringing slightly during season 1 and wondering for the 347th time why i felt such a compelling commitment to see every series through, dubious and otherwise, that I’ve embarked on. Here’s what I remember even as I dredge up the memories from the practical, unemotional series-bingeing depths of my mind:

The characters were more than a tad over-dramatic – Captain Sisko often comes across as a stand up comic endearingly poking fun at would-be space bigwigs; while the good Doctor Bashir appears so entranced by his own look, feel and sound that one would be forgiven for mistaking him for the English, Space version of a Doogie Howser impersonator. Major Kira (Colonel now!) is relentless in her adolescent knee jerk outbursts of anger, vengeance and the insatiable need to be the biggest bully in the Alpha quadrant…. nah… all Space. Then there are the dated special effects: the barely camouflaged fluorescent primary coloured lights blinking on 24th century tricorders and control panels; the landing/ disembarkation pads which looked like ponderous railway tunnels; the defiant, brave little ships in space, dithering ever so slightly against their starry backdrop – trembling reminders of their actual minuscule size and mass; the phasers and other laser weapons put to shame by the contents of aisle 15 in Toys ‘r’ Us. But…. like i said, i had to laboriously dig up these first and not so lasting impressions.

What I do remember effortlessly is the superb characterisation of Quark the quintessential Ferengi who’d grown a heart and a bit of a conscience over the course of the 7 seasons; Garak who was as devious and resourceful as he was genteel and intrepid; Dukat the bipolar Cardsassian who fought a war of conscience for most of the 7 seasons, finally relenting with a Bajoran bow and a twisted flourish to his dark side; Weyoun, the Gamma quadrant clone who was as duplicitous as he was “god-fearing”; and of course Vic Fontaine, a holographic throwback to the 1960s Las Vegas rat pack style entertainment who was as good a singer as he was a psychothera-pal for the DS9 crew. All in all, the alien characters of DS9 delivered a far superior performance to that of their human counterparts.

The piece de resistance of the series however, is definitely its ability to take its viewers on a compelling, emotional journey into the lives of its main characters. The cloak and dagger plots set a million light years away from earth still took place in what was essentially a little town with its very own set of the good, the bad and the alien. And that was ultimately what made the series so memorable.

-The mainstream ethics/ moral compass portrayed by the Federation of planets, while being lofty and aspirational by our boorish 21st century standards, was still shown to be insidiously riddled with intrigue and deception; its Section 31 dutifully and covertly performing all its ungallant business. I suppose some things are so hard-wired into our psyche, a basic distrust of anyone different from ourselves being at the top of that list, that no amount of evolution and sophistication can wring it out of our DNA.

-America, as is customary across the Hollywood universe, bravely endeavoured to save the day or lead from the front. And so unremarkably, Uncle Sam continued to fill in most of the shoes of the DS9 and the Federation nawabs*.

-I discovered a new-found love for Frank Sinatra’s soulful crooning. I’ve had his vocal jazz and swing numbers on quick recall on my phone for the last fortnight. Vic’s repository of the legendary tunes pulls at all the melody-clinched strings of my heart!

-The MC at Joe Biden’s inauguration ceremony sounded eerily like Worf, the Klingon!

I watched the last show of the last season last night. A net total of 176 episodes viewed, imbibed and psychoanalysed nostalgically during the last 4 weeks. Almost made me forget we’re in the middle of a pandemic as I traversed through space and time with the crew and the citizens of Deep space 9/ Terek Nor.

I leave you with a nostalgic old Sinatra refrain sung by DS9’s own Vic Fontaine, just because it’s such a lovely old song and even half a millennium on, it resonated richly, poignantly, on a space station somewhere in our cosmos.

*Nawab: a male title which literally means Viceroy; the female equivalent is “Begum” or “Nawab Begum”. The primary duty of a Nawab was to uphold the sovereignty of the Mughal emperor along with the administration of a certain province. In modern times, it is often used to denote men of power.

A wandering “desi” and a corporate chicken who’s flown the proverbial coop is what I currently am. Have chosen the sultry island of Sri Lanka for my wandering/ experiential activities. Writing something- anything really, has been on the bucket list for a great old while. Finally putting some pixel energy behind the cause! This blog will be about a wide gamut of opinions, ideas, characters, storms in teacups, extraterrestrials, food for the soul (and some not so much), space (of the cosmic and personal varieties), cutting edge psychoanalytic analyses, and sunsets (Dysania-struck so probably no sunrises!) – all presented to you from a wide array of coffee shops across my modest globe-trotting sojourns. Here’s to enjoying the ride together! https://www.facebook.com/Mahvash.Moht/ View more posts